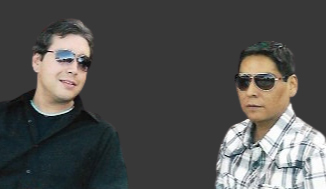 On May 8, 1981, Michelle Paisano Hutchens & Edwin Hutchens Jr. came home from New York for a visit and Edwin J. Hutchens III was born in Albuquerque. The Paisano family was ecstatic because Ed was the first-born grandchild in the family. On September 3, 1982, Gregory T. Suazo was born to Aleta “Tweety” Paisano-Suazo and Norman Suazo in Albuquerque. The boys were brothers from the beginning.

In 2009, Edwin moved back to New Mexico, due to an economic downturn. He hoped to finally start his college education – a long time aspiration. The year before, Greg went through a treatment center for alcohol abuse and needed an occupation that did not involve being around alcohol. After much discussion, the brothers decided to live together and attend SIPI. Ed began his degree in Pre-Engineering & GIS/GPS, while Greg started on a degree in Information Technology.

Gregory graduated from SIPI with his AA degree in Information Technology on April 27, 2012. Sadly, just ten days later, Greg died from years of alcohol abuse. He was a loved and gifted son who always marched to a different drum. While a successful student with a 3.8 GPA, Greg was a functional alcoholic whose demons never let him go. The nightmare of losing Greg to alcoholism deeply affected every member our family, as it has countless Native families.

In 2014, the boys’ grandfather, Ralph Paisano, suffered a stroke. Ed had already received his CADD certificate in August of 2013, and although he was still working on this Pre-Engineering Degree, he decided to take a break from school and care for his grandfather at Acoma. Ed and his grandpa, who were always close, became closer during the months they lived together.

On May 7, 2014, Ed was on Facebook stating how much he missed his brother Greg, who had died that day just two years earlier. He was also packing for a trip to Denver, where he was to serve as Best Man at a friend’s wedding. That evening, he joined his cousin just across the street from his grandfather’s house for a party. It was sometime that night or early morning that Ed was murdered. He was found the next day (his birthday) on our property. We quickly learned what it was like to deal with murder on tribal lands.

After Greg died in 2012, his mother Tweety went to work at SIPI. She saw the need that many native students attending SIPI faced during unforeseen emergencies where assistance was needed for rent, utilities, gas money, bus passes, emergency housing, student fees, food, etc. As a tribute to honor the memory of her son and nephew, the Suazo-Hutchens Emergency Fund was established to help SIPI students stay in school and complete their education.

Our families ask that you honor these men by giving to the Emergency Assistance Fund and support SIPI students on their path to success.